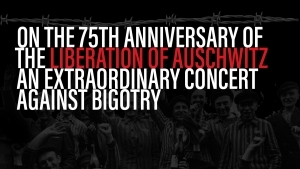 In the 75th anniversary of the liberation of Auschwitz: an Extraordinary Concert Against Bigotry

Presented by: The Museum of Jewish Heritage – A Living Memorial to the Holocaust, The National Yiddish Theatre Folksbiene, Temple Emanuel Streicker Center, UJA-Federation of New York, The New York Board of Rabbis.

Additionally, the concert will feature a keynote address by Rabbi Joseph Potasnik, Executive Vice President of The New York Board of Rabbis.

On the afternoon of January 27, 1945, Allied troops entered Auschwitz concentration camp, liberating the 7,500 prisoners still living, discovering the corpses of 600 more and the ashes of another 1.1 million.

To commemorate that day, to underscore the commitment of the Jewish community to never forget and to continue the struggle against anti-Semitism and all forms of racial and ethnic hatred, Yitzhak Perlman will be headlining this very special musical event. He will be joined by the cast and orchestra of Fiddler on the Roof in Yiddish and leading Klezmer musicians to revisit his musical journey of the 1990s from the Lower East Side to the Jewish Festival in Krakow.

Once a month, under the sponsorship of the Women’s Auxiliary, Emanu-El congregants serve dinner and organize art projects and entertainment for the families residing at New York City’s Ronald McDonald House. Volunteers must register with the Women’s Auxiliary: 212-744-1400, ext. 235. Open to temple members only.

IMMIGRATION: The first Jew was an immigrant. Does that mean we should support open borders or admit those who disagree with us? Part of the Modern Matters: Ancient Jewish Wisdom Series with Rabbi David Wolpe. Struggling with today’s cascade of political and social controversies? Why not discover what Judaism has to say about them? After all, between the Five Books of Moses, 2,711 pages of the Talmud, the Mishnah and 5,779 years of history, Judaism offers important lessons about almost…

Growing Together: New Parents Drop In

With a new baby at home, parents need a place to share both newly minted parenting wisdom as well as their concerns. Drop by and make the kind of friends you can grow with! Your baby is welcome, too!